We headed to another and, again, very different, calanques on the 28th Feb. And again, there were no other climbers in sight, being well in the off-season (February is considered too cold and windy), and on an overcast, bordering-on-rain (we were caught in the downpour but, fortunately, near the end of the reverse approach) day.

The calanque is quite different in character to Sugiton and Morgiou because it is narrower, and the overcast day made for a very different atmosphere and feel. The hour+ approach down/uphill was fine for me, especially since Yves was carrying both ropes, I have a tank of a right leg, and the road/trail being in good condition.

You can see how much narrower this calanque is

I was quite excited to be climbing on the Les Américains secteur, where Gary Hemming and Royal Robbins had put up a route. Due to time-constraints, we elected to run up La Révolution (6a) (with me accidentally doing the first pitch of La Si-ray, instead).

I like the picture below because I can recall what I was thinking in that moment: and that was how amazing, how incredible the fact I was standing in that spot overlooking the azure blue waters, even alive, let alone having gone from skiing, ice-climbing, rock-climbing in the space of less than 10 days. 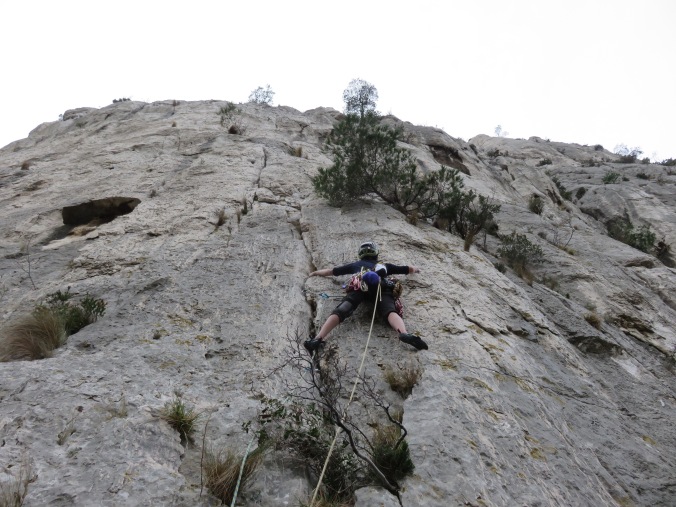 Compression moves are a common thing for me, since I often have to unweight both legs to make a move (Photo: Yves) 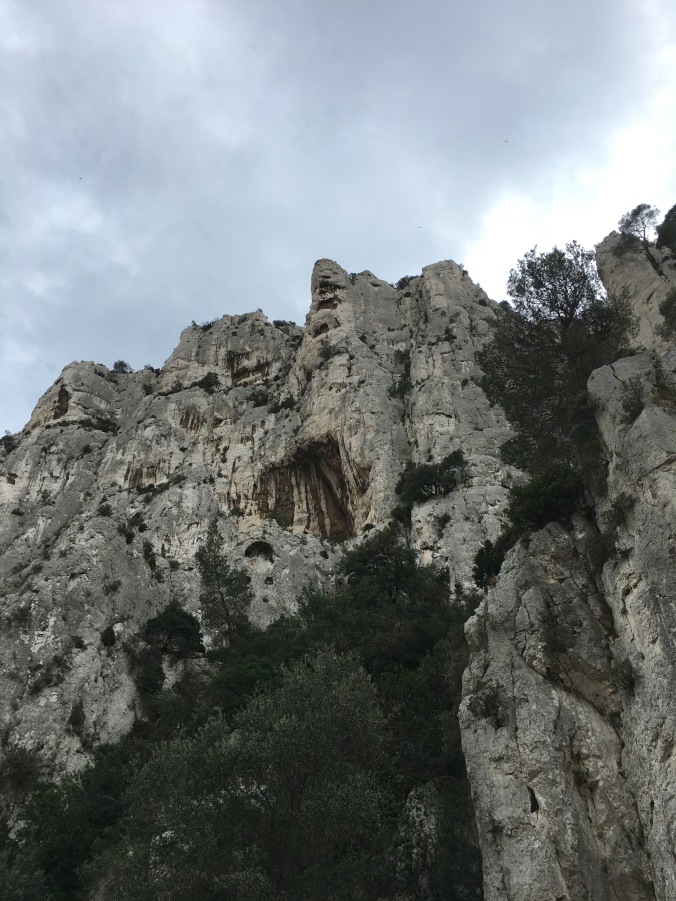 In continued awe of my surroundings (Photo: Yves)

After rushing back to the car to get out of the downpour, and upon arrival at a coffee shop to attend to some affairs, I was met with an unpleasant surprise. When I opened up my wallet, I discovered all my cash, credit cards, and bank cards had been neatly taken out of my wallet. My U.S. drivers license, health insurance, and other (non-financial) cards remained; how considerate. I knew Marseilles was known for its crime, but I did not expect leaving my wallet in the glove compartment, out of sight, in a remote parking lot, was in danger. These thieves were pros; they must have been making the rounds of fairly out of the way parking lots (we were the only car there when we arrived, and not many more cars were there upon our arrival back in the late afternoon).

Of course, the first step was cancelling all my cards and disputing any transactions that might have taken place. If I had been on my own, I would have figured out a way to get some kind of cash advance or credit card mailed to me. But, having Yves there was such a tremendous help, both practically for the rest of my stay in France, and also just in terms of emotional support for these kinds of small, but really really annoying, pain-in-the-bloody-arse kinds of incidents which can really be a big blow to an experience. Now, the overwhelming majority of my travels in my teens and 20’s was solo. But as I have gotten older, I have realized the value of traveling with a friend, partner etc. and makes me feel very appreciative of being on this with Yves.