I love revisiting a place and seeing it from a different perspective. In this case, I returned to Sintra only a few days after I first went there, to check out the climbing a bit. This was my first (and only) climbing experience in Portugal, and it was a nice introduction.

The routes were short (the longest route we did was three short pitches), and sport climbing, but thoroughly enjoyable with some pretty great views. I mean, how many crags have a view of a castle??! 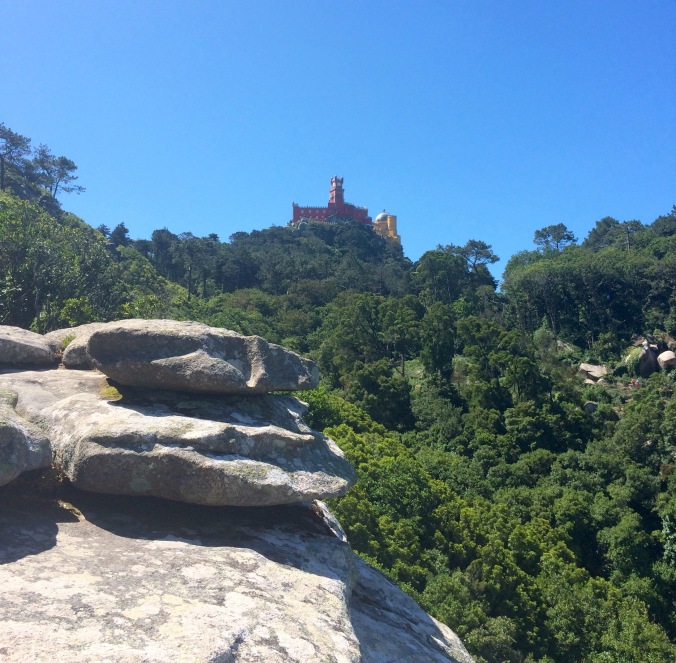 View of Palácio da Pena from a belay

Being July, we only climbed for a half day before it got too hot.

View of Sintra from another belay. You can see the Quinta da Regaleira in the left foreground 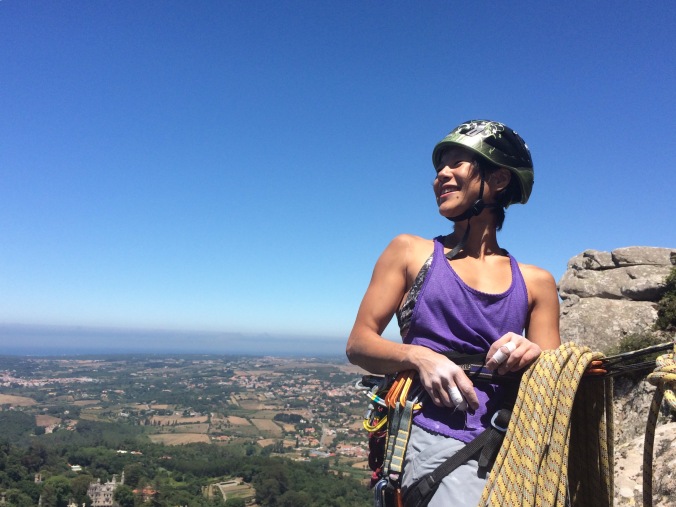 I was pleasantly surprised by the quality of the granite here. Certainly there were some dirty parts, but the routes that were clean had great rock. 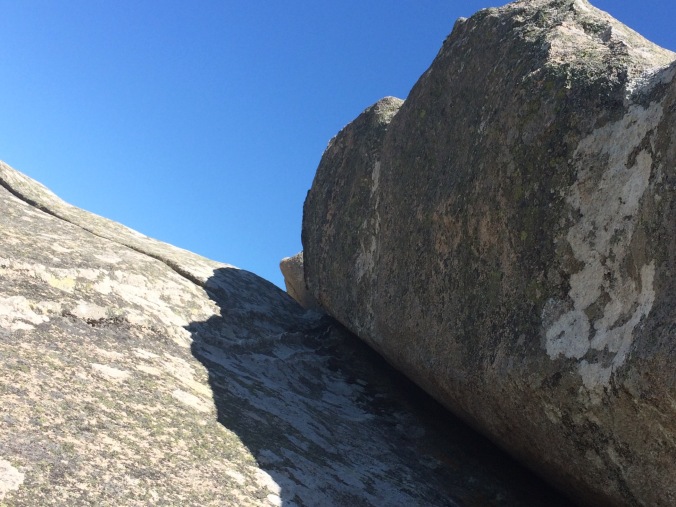 Sintra is noticeably cooler than Lisbon. So while it was a warm day, I was super glad not to be in blazing hot Lisbon. We did not see any other climbers, which made for a great climbing experience. I guess that is not too surprising given that climbing is not hugely popular in Portugal, and this area is also not super popular. I’ll certainly bring some light climbing gear with me the next time I am in Portugal.

Sintra is a UNESCO World Heritage site located less than an hour by train away from Lisbon (trains depart from Rossio station in Lisbon). Despite its proximity to Lisbon, its noticeably cooler microclimate and lush setting make for a distinct contrast to Lisbon.

The place is quite the trip! I had seen pictures of the Palácio da Pena online, so had kind of expected the tutti-frutti exterior of the place. But I was surprised by the contrast between Palácio Pena and the other sites, namely Castelo Dos Mouros (Moorish Castle). I was also surprised that the trip occupied more of the day than I thought it would (not in a bad way).

I hate lines and having to wait unnecessarily, so I was keen to get to Sintra not too late in the morning to avoid even more crowds. In opposition to Scott, I also insisted we have a rough plan for the trip. It seems that most people hit the three main sites in the following order, moving up in elevation: Palácio Nacional de Sintra, Castelo Dos Mouros, and then Palácio da Pena. Since I thought Palácio da Pena and Castelo Dos Mouros were the priorities, and I knew I probably would not have interest in seeing three palaces/castles in a day, and I prefer walking downhill, I suggested we start at the top of the hill at Palácio Pena, then head down to Castelo Dos Mouros.

First, we had to fortify ourselves with coffee and queijada, a pastry specific to Sintra. Everyone knows pasteis de nata, but I actually prefer the marzipan like filling of queijada, consisting of cheese, sugar, and eggs. The Portuguese actually use cheese in quite a lot of their pastry fillings, and I’m a fan. 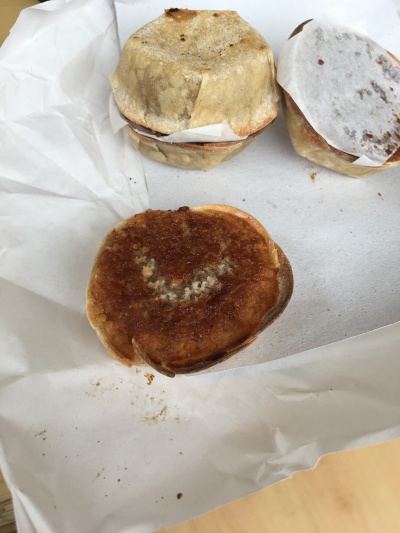 The day started off windy and overcast, and I think that made the colours of Palacio Pena look less vibrant than I expected. But the place was still a bit of a riot. The palace is considered a national monument in Portugal (and one of the country’s Seven Wonders), and is a pretty striking example of 19th century Romanticism, whimsy, and Moorish influence. 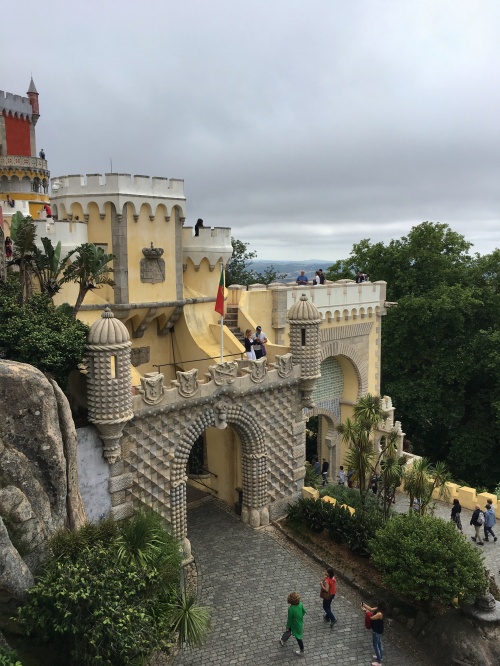 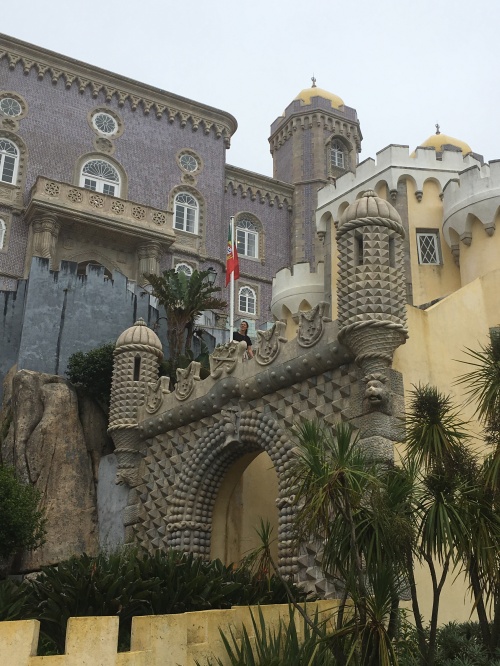 It was a bit windy (Photo: Erich Schlaikjer)

After touring the interior, we headed down the hill to Castelo dos Mouros. 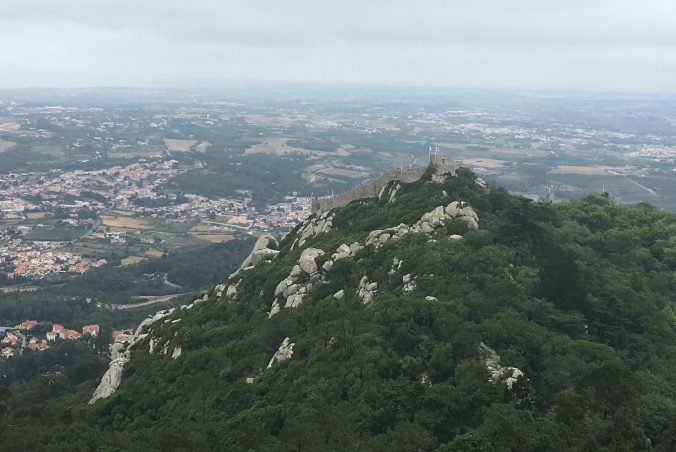 View of Castelo dos Mouros from Palácio Pena. There are rock climbing routes on those slabs below the castle.

Looking up at Pena Palace from the Moorish Castle

The Quinta da Regaleira had not been on our radar at all, until our Uber driver told us it was his favourite place in Sintra. It was also a geocaching site, which was incentive enough for our friend Erich to go. Surprisingly, it was the site with by far the longest lines of the day.

The geocache is down this well. Somewhere. Or was it in the other well? 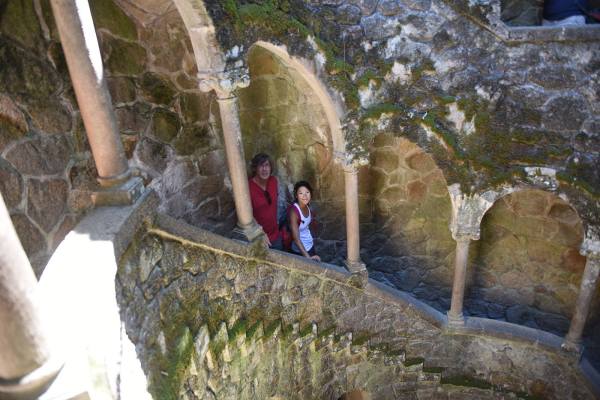 Heading down into the abyss (Photo: Erich Schlaikjer) The main house of the Quinta da Regaleira

We were all pretty knackered by the end of the long day, but Sintra is well worth the excursion if you’re in the Lisbon area. I even ended up returning a few days later for some rock climbing on those slabs near the castles.