…a little crag in Central Mass. (I should clarify that NIAD = Nose-in-a-Day).

My friend Clint, a Yosemite encylopedia who did a fair bit of climbing around here in his student days at Harvard, suggested Crow Hill Ledge as a spot to practice jumaring, given the proximity to Cambridge (less than an hour), not very long approach (I would have said “super short” in my pre-accident days, but approaches are never too short for me these days), and sufficient height and over-hang at Fisherman’s Wall. Fisherman’s Wall is about 90-100 feet high, over-hanging and from what I had read, there is a trail that goes right to the top of the ledge.

Nevertheless, I was nervous about the planned endeavor for a number of reasons. I had not jugged a line in over five years; I would need to figure things out from what seemed like scratch because my memory was foggy, I have been out of practice, and I would be switching the handedness of things – I used to have my right ascender at the top, left ascender on the bottom, and step up with my left leg on over-hanging terrain.

I knew I wanted to go out there on my own because (a) I do not want to have to rely on someone to help me schlump my gear every time I want to go somewhere (b) I knew I would feel more comfortable flailing alone while I figured out how to do this all over again, and (c) I don’t want to feel like I have to be with someone every time I explore a new climbing area, although company in unfamiliar territory is certainly a nice thing. My partner does not really climb outside, and I don’t know many people around here who are psyched on cracks and trad, let alone aiding. Most of my anxiety centered around me not being sure how I would manage on the approach to the top of the ledge to fix my line, given that I would be carrying a thick rope and all sorts of heavy anchor building gear because I did not know what to expect up there. There is also something a little un-nerving to me about not having a partner around to double-check my set-up.

In any case, I knew I’d feel like a total pussy if I didn’t go do this, so off I went. The walk to the base of the crag was manageable. It was a bit slower walking to the top of the ledge and finding the right trees to build anchors off of. After building a meticulously safe anchor, I descended a little bit only to find that this was not the part of the crag I wanted to throw my line down, so I had to break that anchor down, re-coil the rope and walk another 50m or so, before I found two nice live trees to build anchors around, and a third tree for a re-direct. Something I am realizing about New England climbing (that is not sport-climbing), is that I need to bring way more/super long slings/cord to build anchors. I was also reminded of how I rather dislike single rope raps. Nevertheless, I zipped down my fixed line with no incident.

Fisherma’s Wall. The left diagonal crack is a 5.8, and it is difficult to make out in the photo, but there is a 5.11 crack on the far right of the picture. I like the shadows of the trees.

All these horizontal features are still a bit alien to me :) The rope actually falls about 20 ft away from the base, which gives some indication of the not so obvious overhang of the wall.

It took me awhile to dial in my system e.g. adjusting the daisies to the right height, getting used to pushing up with my left hand over my right one, dealing with annoying things like biner gates facing the wrong/annoying way etc. I think I worked out the kinks after the first lap or two. I decided to do five laps, then take a little break. I even allowed myself a few sips of water, despite my worries about peeing in my pants.

I then did another five laps. I was tired. I had also forgotten how much chafing action there is going with jugging (and I’m not talking about my rolls of skin :)). But the limiting factor in me deciding to make my tenth lap my last one wasn’t so much fatigue, as it was me not being at all psyched about my rope running over the edge like that. After the first lap, I moved the rope to be over a less sharp part of the edge, and would check every time I reached the top of a lap; but nevertheless, I was not enthusiastic about this and decided to cut out while I was ahead after a nice round number like Ten. Next time I will bring even longer slings and cord to run the master point over the edge. 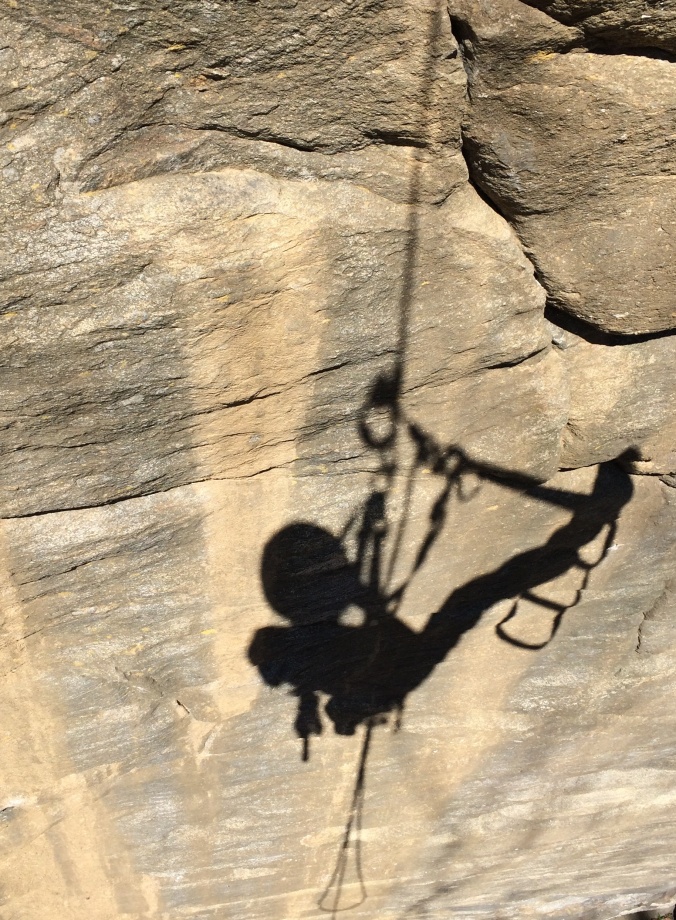 All in all, in spite of my anxieties going into this, it was a rather successful day. I didn’t die; I didn’t get hurt; I figured out how to steeps/over-hangs again. Next steps will be building up jugging stamina, and figuring things out on non-overhanging terrain, where I will have to put my left foot in the aider and use my left leg. Also, I will have to figure out the hydration situation :( I found myself very dehydrated, even after this little affair, and I’ll have to figure out how I can drink enough to keep me hydrated without causing me to wet my pants with my incontinence issues; and how to cath myself on a wall. I am guessing there will be some trial and, unfortunately, error here. 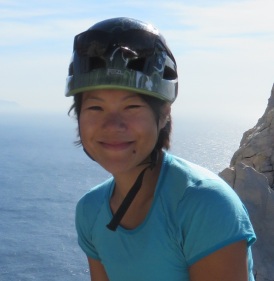